Most Popular Testing Tools in 2017 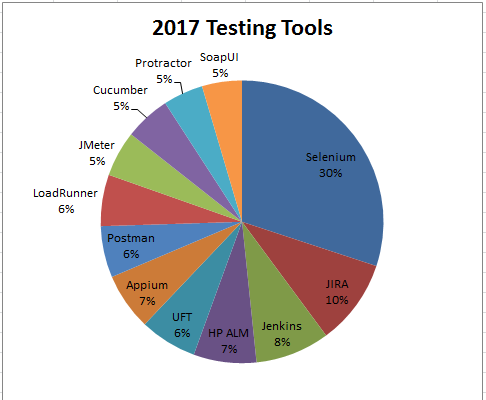 I recently conducted an informal Testing Tools survey on LinkedIn and asked the following question:

If you are a software tester, I need your help. What software testing tools does your organization currently use?

I received a significant number of replies and based upon that information I have gathered some very interesting information.  I compiled 230 responses and identified the most popular testing tools.

As you can see Selenium received the largest number of votes by a wide margin.  For most people in the software testing industry, this is not a huge surprise.  With open source testing tools making significant strides in the last few years and companies looking to save expenses by going open source, it is expected that a testing tool such as Selenium would be widely used.  The big takeaway for testers: Learn Selenium.  In order to effectively use Selenium, you are going to need to learn how to learn Java programming.

If I would have asked this question 5 years ago, HP QC and QTP would have been at the top of the list.  I doubt ALM/UFT will be able to get much higher in terms of utilization, but it will be interesting to see if Micro Focus, who recently purchased these tools from HP, will be able to turn things around.  The tool stack is well integrated between ALM/UFT/LoadRunner but that isn’t enough anymore.  In my opinion the leading factor is cost.  Testing organizations simply don’t have the budgets anymore to pay large sums of money for licensing costs.  The second factor is these tools failed to keep up with the changes in technology and let smaller and leaner organizations beat them in developing better testing tools.

I am not surprised by the relatively low numbers of performance testing tools currently being used by testing organizations, but I would strongly recommend companies begin to take this seriously.  When performance testing is not adequately done, it is only a matter of time before catastrophic issues occur.  Have testers forgotten about Healthcare.gov?

I asked a fairly broad question on LinkedIn.  It was by design.  I primarily wanted to understand what software testing tools were being used, but I also wanted to get a better idea of what tools testers use outside of testing tools.  If you take a look at the chart above, JIRA and Jenkins were heavily used tools.  Long gone are the days were testers only have to worry about learning testing tools.

I hope this information has been helpful.  I have been able to gain a better appreciation for the challenges software quality engineers face everyday.  I encourage you to take this information and learn a new software testing tool today!